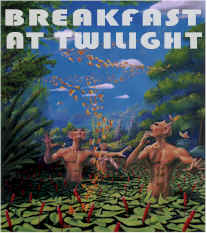 There you are in your home, and the soldiers smash down the door and tell you you're in the middle of World War III. Something's gone wrong with time. I like to fiddle with the idea of basic categories of reality, such as space and time, breaking down. It's my love of chaos, I suppose. {PKD}

TTHC    263:   Dick's sub-agents at Scott Meredith felt free to comment on Dick's work as they received it. Some of the stories are rated: "G" for  "Good," "G plus" for better. Sometimes there are just comments, {...}But Dick seems to have stayed in fairly close touch, and the agency followed his advice when he gave it. "Don't try Gold, as he doesn't like this kind of yarn, Dick sez" is the annotation for "Breakfast At Twilight" (a story with a Galaxy-like theme, written however with no satiric wink).