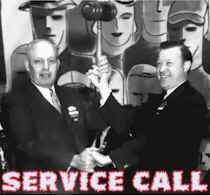 When this story appeared many fans objected to it because of the negative attitude I expressed in it. But I was already beginning to suppose in my head the growing domination of machines over man, especially the machines we voluntarily surround ourselves with, which should, by logic, be the most harmless. I never assumed that some huge clanking monster would stride down Fifth Avenue, devouring New York; I always feared that my own TV set or iron or toaster would, in the privacy of my apartment, when no one else was around to help me, announce to me that they had taken over, and here was a list of rules I was to obey. I never like the idea of doing what a machine says. I hate having to salute something built in a factory. (Do you suppose all those White House tapes came out of the back of the President's head? And programmed him as to what he was to say and do?) {PKD 1976}