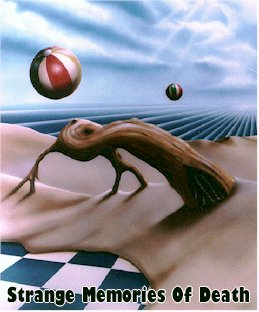 Favorite Story: "Strange Memories Of Death." A haunting tale. Phil's writing just got better and better. Let no one tell you that he wouldn't still be writing great stuff today if he hadn't died in 1982; this story proves it. Phil's early death was a catastrophe for world literature. No one has remarked on this enough. -- Gregg Rickman, CA

"Strange Memories Of Death" was written in early 1980, after Phil's apartment became a condominium; "SMoD" is Phil's original title, but his agent tried (unsuccessfully) to market it under the title "Blessing In Disguise." The story was first published in Interzone # 8, Summer 1984. {Paul Williams}

{...}I am spellbound time and again by "Strange Memories of Death," one of the greatest short stories I know. It seems that Dick's narrative voice inevitably gives you the feeling of being personally addressed by an intimate yet anonymous acquaintance, which wouyld account for that special joy you feel if now and again the originator of that voice sheds the distancing guise of third person narrative and speaks for himself a while.