"He undermined their world with mockery!"

{For the best bibliographic info in French goto: www.multimania.com/ggoullet/pkdick/frames.html Thanks for the cover pix, Gilles}

The thin citizen laughed harshly. "That's what they want you to think. Sure, a harmless prank. I'll tell you something: the people that did this mean to overthrow Morec. They won't rest until every scrap of morality and decency has been trampled into the ground. They want to see fornication and neon signs and dope come back. They want to see waste and rapacity rule sovereign, and vainglorious man writhe in the sinkpit of his own greed."

Standing there at that point I did some deep thinking. It seemed to me that magazine-length writing was going downhill -- and not paying very much. You might get $20 for a story and $4000 for a novel. So I decided to bet everything on the novel; I wrote THE WORLD JONES MADE, and later on, THE MAN WHO JAPED. And then a novel that seemed a genuine breakthrough for me: EYE IN THE SKY. {PKD}

LETTER 1: Feb 10, 1958 from 1126 Francisco, Berkeley. 2pp.
This is a tardy response to Blish's reviews of THE WORLD JONES MADE and THE MAN WHO JAPED in Fantasy Times, apparantly the first time that PKD ever wrote to a reviewer:

As for JAPED, "the topic is not American culture but the society coming into existence on mainland China." He identifies "the idea of center" as the "critical concept... This is the nature of totalitarianism, this facing toward the center. The hub. You see, I wanted to show that as dreadful as commercial bourgeois US culture could be, there are things that pose a greater danger, go further in destroying the integrity of the individual. Block committees are worse than TV." Part of the motivation came from some of the responses to SOLAR LOTTERY, which assumed that to have been written from "an extreme left position". PKD wanted to take the other side too, and saw some evidence of success in the fact that several of the reviewers who had liked SOLAR LOTTERY denounced JAPED.
He also points out that JAPED was written after EYE IN THE SKY, and concludes (rather sadly in retrospect) "JAPED is my favorite of my books; I feel it has genuine literary worth. The sentences are better built. The language itself is of a higher character. And here, I made my departure from SF to straight novel-writing, which I've done ever since, I'm determined to do a good solid contemporary novel. Maybe some day I'll sell one of them."

{From a letter from Nick Pratt, Oxford, England. On the James Blish/PKD correspondence}

In Italy Mondadori has bought the rights to THE MAN WHO JAPED.

In a letter responding to Anthony Boucher's review of EYE IN THE SKY, Dick mentions having to rewrite portions of that book and, "The other three were changed, too, cut down rather than changed for content, and they did suffer. In my own opinion THE MAN WHO JAPED is a far better book than any of the others. I had to cut 75 typescript pages from it, though." The letter expresses at some length Dick's pain at the poor payment he is receiving for his novels (combined with an awareness that he's fortunate to be published at all), and his frustration at his inability to sell the five mainstream novels he had "in circulation" at that point. (This suggests that he had withdrawn his earliest efforts VOICES FROM THE STREET, and GATHER YOURSELVES TOGETHER). He also confirms that he's had a break with Meredith in 1956 and tried, unsuccessfully, to find another agent.

In England, THE MAN WHO JAPED is in print from Methuen. 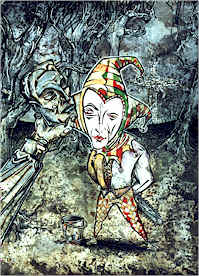 Just how boastful of bashful Phil was about his SF career depended, in part, on just whom he was around. When THE MAN WHO JAPED came out in 1956, Phil proudly made a special visit to display a copy to Dorothy...

Of the early novels, only THE MAN WHO JAPED came out as Phil named it.

{...} Purcell's big TV "jape" is a rip-off of Jonathon Swift's "Modest Proposal" -- but, after all, Phil's lost first novel was called A RETURN TO LILLIPUT...

There is, however, compelling evidence that amnesia was on Phil's mind at least as far back as his early novel THE MAN WHO JAPED, whose protagonist revolts against a puritanical regime by defacing its monuments, and then forgetting he's done so.

Once, Dick related, one of his psychiatrists laughed at him; he paid back the profession with interest in his later novels. JAPED provides a particularly rich example of satire when Allen Purcell, seeking help for his amnesia, is subjected instead to a battery of silly tests for psychic powers, from telepathy and precognition, to communication with a lizard and the turning of a hair into a worm.(ch.12)
...
Ultimately Dick questioned psychiatry's function as society's "reality enforcer." Sometimes this critique is limited to the role of therapy in "adjusting" someone to an unjust society. The seemingly free "Resort", in JAPED, is in fact an integral part of the system. "Morec is one half and you're the other. Two sides of the coin." (Ch.17)

...After reading Dick's third published sf novel, JAPED, Damon Knight saw it as aping Kornbluth and Pohl's THE SPACE MERCHANTS in its "drama of an ambitious (advertising) agency man in flight from his own conscience," and saw it echo "THE DEMOLISHED MAN-ish double life of Allen Purcell" as well.(fn14) Dick himself noted the influence of Alfred Bester's THE DEMOLISHED MAN on his work; this amazing hyperbolic work must have encouraged Dick to plunge boldly into works laden with many different, seemingly conflicting factors, wildly pinwheeling inside of each other. He must also have been drawn to Bester's intense psychological dynamics. At novel's end its protagonist's world collapses around him: "Did the stars really go out or did he just think they went out?" he asked a class on science fiction in 1973. "I think that's one of the most important pieces ever written. I got off on this concept -- when his mind deteriorates, the world deteriorates." (fn15)

...Thomas Disch (in his Foreward to SOLAR LOTTERY had called him "the only Marxist science fiction writer there is," {to which PKD replied:} "anyone who understands...THE MAN WHO JAPED would never make the error of thinking that I was a communist or Marxist. Because this is a very, very sincere attempt to show the very dangerous trends in Communism, the Communist state." (fn14)
For all that, the novel's dominant mode is satire. "For the first time," he told me, "my sense of humour is beginning to show up in a novel."

THE MAN WHO JAPED reached Meredith in Oct 1955, and was published by ACE the next year, backed with E.C.Tubb's THE SPACE BORN. It was the third published of his novels, preceding EYE IN THE SKY. Dick told me that Wollheim said it was "the worst of them all,"(fn16) but Wollheim told me {Rickman} he liked it. Knight gave it a mixed review. He continued to see promise in what he called "journeyman work".(fn17) Dick himself told Blish that "JAPED is the favorite of my books; I feel it has genuine literary worth. The sentences are better built. The language itself is of a higher character."
... No new science fiction reached Meredith after JAPED until two hybrid sf/straight novels which reached New York in early 1958, NICHOLAS AND THE HIGS, now lost, and TIME OUT OF JOINT, published as "A novel of Menace" in 1959.

After turning in JAPED to Meredith in Oct 1955 Dick... gave up sf to concentrate exclusively on his literary fiction. A TIME FOR GEORGE STAVROS was the first of the new cycle to arrive...

"That was my attempt to introduce humor into the science fiction novel... it does have, for the first time, my sense of humor is beginning to show up in a novel."

{... ...} In my own opinion THE MAN WHO JAPED is a far better book than any of the others. I had to cut 75 typescript pages from it, though. To fit into the ACE Double edition. But I would be the last to complain about ACE , since they've kept me alive these several years. And on a personal level Don Wollheim has given me extraordinary encouragement and attention -- as have you, as you well know. {...}

Now, to your review of JAPED, which you liked. I appreciated your statements, esp. your saying that you enjoyed the choice of words. This was my last s-f novel -- came later than EYE IN THE SKY. Here, I think I got onto a much higher level of style. Anyhow, I tried to. JAPED is my favorite of my books; I feel it has genuine literary worth. The sentences are built better. The language itself is of a higher character. And here, I made my departure from s-f to straight novel-writing, which I've done ever since. I'm determined to do a good solid contemporary novel. Maybe someday I'll sell one of them; I have five or six that Scott is submitting to hardcover houses. As to JAPED: I have to, in all fairness, say this: the topic is not American culture but the society coming into existence in Mainland China. The Puritanican left-society with its emphasis on confession, fear, guilt, omphalos: which is the critical concept:the idea of center. In really authoritative CP writings, you get this again and again: "Center says... it's the policy at center." This is the nature of totalitarianism, this facing toward the center. The hub. You see, I wanted to show that as dreadful as commercial bougeoise US culture could be, there are things that pose a greater danger, go further in destroying the integrity of the individual. Block committees are worse than TV. And -- I was motivated by the acclaim in some circles toward my first book, SOLAR LOTTERY; they seemed to feel that I was bitterly attacking democrat society! That I was taking an extreme left position. They saw more in my book than I meant... and I wanted to take the "other side", then, and have a go at the left. And by golly, those same reviewers denounced JAPED. Evidently they grasped that I was getting at their sacred cow. {...} --

(By the way, Terry; Al Halevy agrees with me that THE MAN WHO JAPED, put out by your firm, was the best book I've ever done. Thank God somebody finally agrees with me; I honestly never thought MAN IN THE whatever was very good; in fact I wan't even going to send it to Scott, but my wife browbeat me into it.)
{PKD > Terry & Carol Carr, Oct 16, 1964}

Digressions on The Man Who Japed by Frank C. Bertrand

To the Novels page