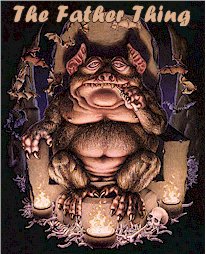 I always had the impression, when I was very small, that my father was two people, one good, one bad. The good father goes away and the bad father replaces him. I guess many kids have this feeling. What if it were so? This story is another instance of a normal feeling, which is in fact incorrect, somehow becoming correct ... with the added misery that one cannot communicate it to others. Fortunately, there are other kids to tell it to. Kids understand: they are wiser than adults -- hmmm, I almost said, "Wiser than humans." {PKD}

Here is the rewrite on "The Father-Thing." Eleven new pages. A new ending, as you suggested, and reworked material throughout: pages I thought could be improved. The new ending adds one page to the yarn; I tried to keep the length down as much as possible. I agree the old ending cut off too soon, didn't really resolve the situation.
Seems to me the main fault lay in the sudden defection of Daniels and Peretti. I built up a picture of their realism, their loyalty, their organization -- and then had them flee in the moment of crisis, to leave Charles alone. An insult to kids!
I think this will do it, but if it doesn't, I'm always glad to rewrite a rewrite, as I did on the two Doc Labyrinth yarns. I wonder if you would mind letting me know how this goes, in either case. Okay? And meanwhile, I'll keep rustling around, trying to dig up transportation, so we can get together and talk about the ways of fiends.

I hope this won't foul everything up, but here is another ending for "The Father-Thing."  A shorter version: knocks off four pages. Eliminates considerable material, and the ending is more powerful (I think).
In connecting the enclosed with what you have, join these pages (12 through 18) with 1 through 11 of the second version. In other words, this third version makes use of the new pages that preceed page 12.
What a mess. But I wanted you to see both endings together.
Okay?

{This is the Introductory paragraph from Frank C. Bertrand's essay Form vs. Content in P.K.Dick's "The Father-Thing."   See Edika! for the complete essay}

From a wide perspective "The Father-Thing" (F&SF, December 1954) presents, in short story form, Dick’s two essential themes, ones that are repeated in one manner or another in most of his other short stories and novels. The stronger and more pervasive one, in this story, is: what IS a "human" being, as opposed to any other kind of being? And the second theme, one that is prevalent in all of his fiction: WHAT is "reality"? In a sense these two are combined in this story, to the extent that we might ask: what is the reality of a "human" being? That is, how do I REALLY know that (how do I tell, how do I identify, how do I discriminate) this person sitting across from me IS a "human" being? What is REAL about being a "human"? As opposed to, let’s say, an android.

{note: To see the rest of this essay, click here: Form vs. Content in P.K.Dick's "The Father-Thing" by F.C.Bertrand.}

TTHC    22:   In 1972 a science fiction anthology aimed at high school students, Themes In Science Fiction, was published, which contained his short story "The Father-Thing" (1954), a horror tale in line with several 1950s sf stories, most famously the 1956 movie Invasion Of The body Snatchers. In Dick's variant pulpy alien pods replace genuine human beings -- including a boy's dad -- with cold inhuman duplicates.1
Over the next few years Dick received several letters from students asking about the origin of the story, to which he always gave the same answer, an answer put best in a letter to a girl named Ann:

... The idea really came to me when I was a kid. My parents were divorced, and I sometimes didn't see my father for as long as five years at a time. When I did see him, he was always a stranger to me, different from what I remembered. I always remembered him as a kind man, but when I saw him again, he always seemed harsh and cruel. It was if {sic} there were two fathers: the real one whom I remembered, and the "other" father who looked like mine, but was really inhuman and a stranger.2

TTHC    428:    {fn 10:   None of the stories F&SF did publish appeared in the annual volume of "Best" stories from the magazine Boucher edited until his retirement in 1958, although "The Father-Thing" (1954) did turn up in Boucher's anthology A Treasury Of Great Science Fiction (1959).