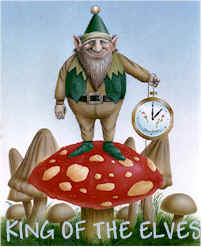 "Shadrach Jones and the Elves"

"The King of The Elves"

This story, of course, is fantasy, not sf. Originally it had a downbeat ending on it, but Horace Gold, the editor who bought it, carefully explained to me that prophecy always came true; if it didn't ipso facto it wasn't prophecy. I guess, then, there can be no such thing as a false prophet; "false prophet" is an oxymoron. (PKD>1978)