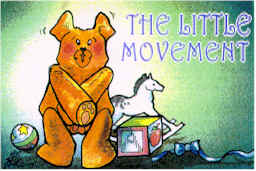 Here is a new page 11 for "He Who Waits." I hope it does. {...}
As to the title: how about "Protection." Or: "The Protectors." Or: "Protection Agency." etc., etc. I like the last. We seem to have plenty of time to decide, if the first "Dick" is coming out in August. I wonder if perhaps this yarn wouldn't be the best "first." "Roog" is more ordinary; its kind is common. This one (and "Little Movement") is more my own kind of story. I'll leave it to you.

"The Little Movement" -- a brand new pretty typed-up version with a few minor changes only, all for the good, I think. It's much smoother.

(If "Little Movement" comes back with a rejection slip, I'll have a stroke)

It occurs to me that if you're looking for a story of mine to include in the treasury of s-f, in my opinion my story FOSTER, YOU'RE DEAD is about my best. It appeared in the Star S-F Anthology Number Three.
By the way -- the above mentioned story was picked up by Ogonek, the largest circulation Soviet weekly (1,500,00). They even drew a number of archaic, foul illustrations for it ... so I have more readers in the USSR than in this country. An odd situation. I never got a cent for the reprint; I wrote to Ogonek, asking for a copy of the magazine, but they didn't answer the letter.
What about some of those short fantasies that you printed of mine? Or is this a strictly s-f collection? If I live to be 100 I'll never write anything as good as those, again. Especially LITTLE MOVEMENT. When I read that, I marvel that I could have written it. Ah, the inspiration of youth ...

PS. How about "Beyond Lies The Wub?" Planet Stories, July 1952. Never been reprinted, & virtually unknown. Not a half-bad story.