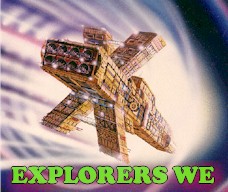 "Explorers We" is a thematic precursor to "A Little Something For Us Tempunauts", and was reprinted as a limited edition booklet to commemorate Phil's appearance at the Second International Festival of Science Fiction at Metz, France, September 1977. It was written in 1958, one of only two short stories that Phil wrote in the seven years between 1956 and 1962.

I'm sorry to keep bothering you with phone call and letter, but I understand that Scott Meredith is going to write to you about "Explorers We" and I wanted to get hold of you first.
As you recall, late in September of last year you wrote to me, expressing an interest in that story, and suggesting changes. I made changes and mailed them back within the week; during the first part of October. Since then I haven't heard hide nor hair from you, but I understand that you are officially away, these days, so I have been happy to wait. However, now I'm getting worried. Maybe there was a slip-up and you didn't receive my rewrite. Or something.
In any case, if you want another rewrite, etc, etc. let me know and I will produce. It may be that the time travel angle didn't convince you, in which case I'm sure another resolution can be found. Okay? Thanks a lot ... and maybe we could get together one of these days, as both of us repeatedly suggest.

TTHC    269:    The uniqueness of Dick's work is pointed up, then, by contrasting it with the work of other sf writers: Pohl or Heinlein, or to take another example, Ray Bradbury. Philip Dick's stories frequently play off of the implicitly conservative values of the field's highly praised 'literary author.' "Explorers We" (1959), for example, ironically reverses Bradbury's "Mars Is Heaven" (1948) and is as well an antidote to all the decades's "body snatcher" tales.