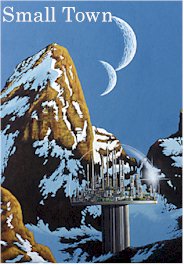 Here the frustrations of a defeated small person -- small in terms of power, in particular power over others -- gradually become transformed into something sinister: the force of death. In rereading this story (which is of course a fantasy, not science fiction) I am impressed by the subtle change which takes place in the protagonist from Trod Upon to Treader. Verne Haskel initially appears as the prototype of the impotent human being, but this conceals a drive at his core self which is anything but weak. It is as if I am saying, The put-upon person may be very dangerous. Be careful as to how you misuse him; he may be a mask for thanatos: the antagonist of life; he may not secretly wish to rule; he may wish to destroy.