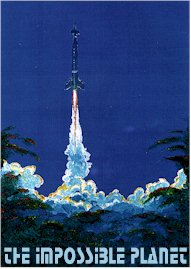 ... A second space captain in "The Impossible Planet" searches records of the entire known universe so that a 350-year-old lady may see Earth before she dies, a quest not as grandiose as Galahad's search for the grail but touchingly human as a cosmic search for roots. ...

Much space science fiction relies on fantastic settings in the far reaches of space or inventive descriptions of Earth years hence. The planetary setting of "The Impossible Planet" pales beside the implications of the word impossible in the title. Knowing of Earth only as a mythical place, presumably the cradle of human life, the space captain resorts to legend much as Hienrich Schliemann did in his 19th century search for the location of Troy. What the captain finds is a planet roughly corresponding to the general description of the legendary Earth ("a third planet of a nine-planet system, with a single oon") but one without the green colour and blue water. It is a wasted world, a gutted, sour, ugly place, but remarkable in that it awakens primal urges in the captain's passenger, an old lady fulfilling a dream. As she walks into the inhospitable ocean to her death, she re-enacts a going-back and a coming-home of the human species.