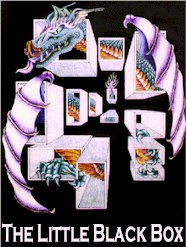 I made use of this story when I wrote my novel DO ANDROIDS DREAM OF ELECTRIC SHEEP? Actually, the idea is better put forth in the story. Here, a religion is regarded as a menace to all political systems; therefore it, too, is a kind of political system, perhaps even an ultimate one. The concept of caritas (or agape) shows up in my writing as the key to the authentic human. The android, which is the unauthentic human, the mere reflex machine, is unable to experience empathy. In this story it is never clear whether Mercer is an invader from some other world. But he must be; in a sense all religious leaders are...but not from another planet as such.

... "The Little Black Box" looks at spiritual superiority. When the time has come for a superior idea to sweep through human brains, can it be destroyed at the source? Even if eradicated, that source lives on stronger in martyrdom than in life. All differences, physical, mental or spiritual, feed the flame of fear in the limited mind. It is that very limitation, not the difference, which destroys.