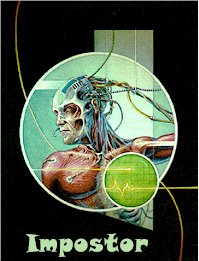 "Aliens come in all shapes, sizes and intentions in science fiction, but what if they looked like us? The shape-changer is a particularly frightening and dangerous creature because when he is present it becomes impossible to trust anyone, even friends or members of the family. It is this sense of increased vulnerability that makes Mr. Dick's story so terrifying. It is worth noting that he wrote it at the height of the "MaCarthyist" period in the United States" -- Introduction to "Impostor" in GREAT SF OF THE 20th CENTURY, ed. Silverberg & Greenberg

Here was my first story on the topic of: Am I a human? Or am I just programmed to believe I am human? When you consider that I wrote this back in 1953, it was, if I may say so, a pretty damn good new idea in sf. Of course, by now I've done it to death. But the theme still preoccupies me. It's an important theme because it forces us to ask: What is a human? And -- what isn't. {PKD}

Vaclav Kriz very kindly sent two items from Czechoslovakia: a copy of PKD's story "Votrelec" ("Impostor"), as it appeared in a 1986 anthology called Strateny Robot, of which 22,000 copies have been printed in hardcover for the Club of Young Readers... and a copy of the 1986 hardcover Temny Obraz (A SCANNER DARKLY), translated by Jan Kamenisty and published by Smena Publishing in a first edition of 50,000 copies!

Here are the German tax forms back for DO ANDROIDS DREAM. Thank you very much for the sale; I can use it.

By the way -- as to the pictures of me. I may have forgotten to tell you that the portrait studio won't have them ready until June fifth. I hope the several publishers who've asked for them don't die of convulsions before that date, but there's nothing I can do to hurry the process up.

Thank you again and best wishes.

PS. Some time ago you notified me that you had sold something of mine (I believe The Impostor) to the BBC for something like $443. What ever happened to that? Do the mills of the gods grind that slow?