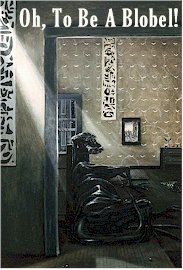 "Well, See, There Were These Blobels!"

{...} OH, TO BE A BLOBEL was originally called WELL, SEE THERE WERE THESE BLOBELS ... I like my title better. I hate these title changers. {...}

Thank you very much for your letter notifying me of the anthology sale of OH TO BE A BLOBEL to Ace. Yes, things are rather rough here financially. I wasn't able to pay my rent last time; {...}

{See: THE THREE STIGMATA OF PALMER ELDRITCH    for more from this letter}

At the beginning of my writing career in the early Fifties, Galaxy was my economic mainstay. Horace Gold at Galaxy liked my writing whereas John W. Campbell, Jr. at Astounding considered my writing not only worthless but as he put it, "Nuts." By and large I liked reading Galaxy because it had the broadest range of ideas, venturing into the soft sciences such as sociology and psychology, at a time when Campbell (as he once wrote me!) considered psionics a necessary premise for science fiction. Also, Campbell said, the psionic character in the story had to be in charge of what was going on. So Galaxy provided a lattitude which Astounding did not. However, I was to get into an awful quarrel with Horace Gold; he had the habit of changing your stories without telling you: adding scenes, adding characters, removing downbeat endings in favor of upbeat endings. Many writers resented this. I did more than resent this; despite the fact that Galaxy was my main source of income I told Gold that I would not sell to him unless he stopped altering my stories -- after which he bought nothing from me at all.

It was not, then, until Fred Pohl became editor of Galaxy that I began to appear there again. Oh, To Be A Blobel! is a story which Fred Pohl bought. In this story my enormous anti-war bias is evident, a bias which had, ironically, pleased Gold. I wasn't thinking of the Vietnam War but war in general; in particular, how a war forces you to become like your enemy. Hitler had once said that the true victory of the Nazis would be to force its enemies, the United States in particular, to become like the Third Reich -- i.e. a totalitarian society -- in order to win. Hiler, then, expected to win even in losing. As I watched the American military-industrial complex grow after World War Two I kept remembering Hitler's analysis, and I kept thinking how right the son of a bitch was. We had beaten Germany, but both the U.S. and the U.S.S.R were getting more and more like the Nazis with their huge police systems every day. Well, it seemed to me there was a little wry humour in this (but not much). Maybe I could write about it without getting too deep into polemics. But the issue presented in this story is real. Look what we had to become in Viet Nam just to lose, let alone to win; can you imagine what we'd have had to become to win? Hitler would have gotten a lot of laughs out of it, and the laughs would have been on us... and to a very great extent in fact were. And they were hollow and grim laughs, without humour of any kind. (1979)

Here I nailed down the ultimate meaningless irony of war; the human turns into a Blobel, and the Blobel, his enemy, turns into a human, and there it all is, the futility, the black humour, the stupidity. And in the story they all wind up happy. (PKD>1976)

To the Short Story page

To the Novels page