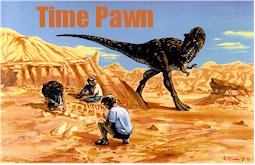 I admire and like Don, and he and I have had a rather long and happy business relationship, but his statements about my rewrite of TIME PAWN make me uneasy -- and well they might. You know that I worked hard on the TIME PAWN rewrite, and I did what I believed to be a good job, one that would please Don. If I went haywire, its news to me. Also, I got it in very early, far in advance of the deadline. I did everything I could to rebuild the story in the best possible way, and the letter that I sent outlining my intentions was a fair and accurate statement by me of what I intended to do, and what I actually did do. He was not stuck or stung. He had the legal right to reject my work entirely, to request any amount of changes he wished. Now, I say this only because his odd way of reacting -- both in terms of what he said and when he said it -- makes me fear on this VULCAN'S HAMMER job. From my standpoint, Don is an enigma. I honestly can't tell what will please him, obviously.

TTHC    263:   Dick's sub-agents at Scott Meredith felt free to comment on Dick's work as they received it. Some of the stories are rated: "G" for  "Good," "G plus" for better. Sometimes there are just comments, {...}
"Time Pawn", a novella eventually expanded into DR. FUTURITY (1960), gave its reader "high hopes for abt 1/3rd of the way" but was ultimately "very disappointing."

To the Short Story page